Brought to you by The Dugout – Live in D2 on Harcourt St with Bernard Jackman and RALA!

During the season you know there will be tough blogs to write. Where things go so spectacularly wrong that you are left pulling out what little hair you have left. I didn’t expect to be writing this in PRE-SEASON! I will try to not write from a place of emotion but much like a car crash, let’s go through the wreckage of Saturday’s game in Twickenham.

So I arrived on the couch in relatively good spirits. If I was honest, I was expecting a performance but a 2 score loss. If I got the former I would be ok with the latter. Always remembering these are preseason, this is not real competition. But also remembering you can’t play rugby without being really competitive. These pre RWC games are just a rollercoaster of emotions and I cannot wait for them to be finished.

The game started well for Ireland. Really well. The players moved fast, hit hard and had their heads up. Resulting in an opening try for Jordan Larmour at 9 minutes.  It was a try built with breaking tackles, making space and offloading in tight quarters. Kearney showed class in a skip pass out the Stockdale who did the Lurgan Chip and sprinted up his line in chase, 3 English players stewarded him past the line, the ball bounced into Larmours hands and he dotted down and Byrne kicked the conversion. The thing here was that England where scared of Stockdale, 3 of them chased down the line with him like he had stolen the chariot. Good signs for me on the couch. 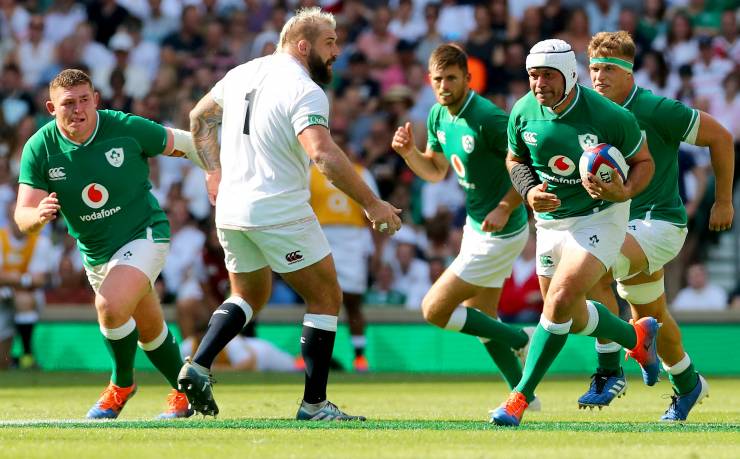 Within 4 minutes, England had scored and from that point Ireland looked tired. Like a team still in preseason, which they are. I know it is repetitive but you need to remember that. Much like a J4 side coming back off a summer of boozing and boasting of last season’s medals, Ireland are still behind the pace. This in itself is not a worry. Fitness comes with games, the team selected on Saturday was closer to the starting side than the Italy game, and that will continue next week. But the tiredness has to stop.

Let’s do a quick stat check:

England had 10 players in double figures for metres run (Cockanasiga at 80, Daly at 79 being their best). Ireland had 9 in double figures, Stockdale topping the list at 40 metres. That shows how the game was.

In the first half alone, Ireland missed 21 tackles to England’s 3. You just can’t beat that stat. No genius play will overcome that.

The online reaction has been unsurprisingly, muck. People losing their minds is not how to navigate yourself out of a problem. Life is always easier from the couch, and as The Couch Pundit, I can confirm this. The talk of Best being passed it, Stockdale being out of his depth and the midfield misfiring is nonsense.

If you look at Stockdale for instance, with Ireland going so narrow it opens up half a pitch on each side of a breakdown. This means that the last 2 players have double the job to do to cover the space. This was especially obvious when Murray went down after being elbowed. Stockdale is damned if he stays in his lane and damned if he doesn’t. He was never going to win that.

Best didn’t have his best day, 2 of the first halves losing lineouts where not the throw. It was the organisation in the lineout. A lot of running around, when sometimes keeping it simple is the way to go. All England had to do was throw Itoje up in the front and Irish confusion won England the lineout. Not Rory’s fault, systems error. Rory will find form, will lead and be good to go for the RWC. We have to remember that is what is important. Not England last Saturday, but England in a semi-final / final.

We have to learn to speak without emotion after a tough game. It was not good, worrying at points but nothing unfixable. There has been an issue over the last 12 months and that issue is between the ears. I think (and this is only a guess), that there has been some sort of fight in the camp. Something has been said to break the bond. Since England in the 6N that we shall not mention, Ireland hasn’t played like Ireland. If you are arguing with someone on your team, you won’t be playing for them and that is what it looks like.

The narrative used to be ‘Ireland has been found out’, that is utter nonsense. Ireland never reinvented the game, came up with magical new plays or did anything revolutionary. Ireland always executed what was expected, better than the opposition expected. That was what brought the trophies. The issue here is that Ireland are doing what is expected, at the same standard as is expected. When that is rectified, the team will be rolling as expected.

It is always darkest before the dawn.

Ignore the ‘fans’ and spend time with the supporters.