After a self-imposed rugby break during the summer months to refresh and recharge after a tough season we find ourselves back in the old familiar green jersey, in the Aviva stadium welcoming our old friends Italy. This is a time of worry, complacency (new word for the new season) and even more worry coming off the 6N that we shall not mention. Could Ireland get a few new players in the jersey, play with confidence and put a score on an Italian team looking for a scalp? 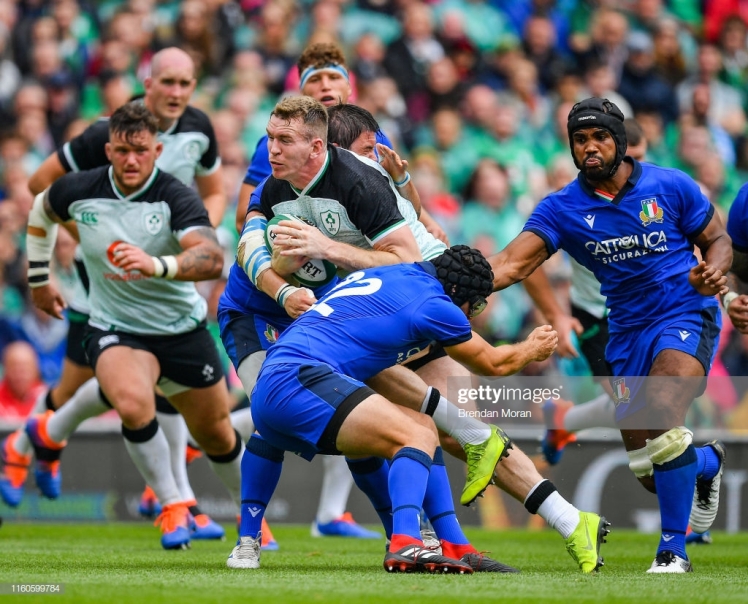 So let’s start with the day itself. As we approached the stadium, I was confident. I liked the mix of experience with new faces. Players needing experience is key. I think King Joe is getting even more paranoid about his depth since the last RWC. Kleyne slipped into the second row for his debut in beside Toner, Herring started at hooker, Luke McGrath started at 9 with Carberry at 10 and Farrell started at 12. The usual suspects surrounded that group of relative (and new) comers. Porter starting at the 3 and then moving to the other side of the scrum as the game progressed was a big sign that he has his plane seat booked too.

So once we took our seats in the north stand. My favourite stand by the way. Real supporters there, no prawn sandwich brigade or premium level snobbery (although if you want to offer me a prem seat, I will be THAT snob). The north stand was full, with a line of Italians behind us so there would be noise. Exactly what I want at a game. We need to be more voluminous than my hair in the 90’s at these games and I was hoping for a near sell out. Unfortunately it was far from that. The top bowl was near empty along with a lot of empty patches mid-level .No idea why the IRFU didn’t give ten euro tickets / up the schools and clubs allowance to get people in. Nothing worse than seeing a national stadium empty. If it was a cost issue, every seat buys something, money is made. It is just a silly decision. I know there are no November games, but hey make zero money with empty seats. Who is the business analyst in the IRFU? They need a new one and I know a guy 😉

So let’s get into the match, it started delicately. More dropped balls than a JCT locker room. It took some time for the team to settle in; when that happened it got solid. Nothing much past solid. Italy took advantage of that and got on the scoreboard first at 13 minutes with a weak defensive effort from Ireland. That was what snapped the home side into relative action.

So let’s look at the stats:

Ireland ran for 431 metres 200 more than Italy, 55% possession for 58% territory, Ireland missed 14 tackles to 21 misses from Italy. For the set piece Ireland lost 1 lineout (9/10) and no scrums (7/7). 9 penalties conceded by both sides show that the discipline and the referee where top level on the day. The last time the teams met, Ireland won by 10. This time it was 19 points. The worry was the passing was just not up to scratch for big parts of the game. Very few offensive passes, meaning a pass that can lead to momentum. A lot behind or above the recipient which slows the entire process down but  are we ever happy?

Ireland had 1 player over 60 metres run for the day which is a different stat. Usually you can rely on wings and fullback to put up big numbers. On this day it was Ringrose who put up the big number (72 metres) from the 13 position. He made and missed 3 tackles, 2 clean breaks, 6 defenders beaten for 2 offloads. These stats show he is confident, but not match fit. Which I think is the key for this match. This was all about getting the oil back in the system, getting the confidence back into the mind and getting the combat back into the body. All of these things happened on the day. Larmour would have had more metres under the boots if he turned right instead of left at times, he was easier to read than the DaVinci code, this was probably under orders.

Italy has 5 players in the double figures for tackle count. All over the pitch. This shows Ireland where trying to attack from all around the pitch. Ireland have 4 players in double figures, they are all made by the pack which shows Italy didn’t have imagination, but they had gas and bulk to keep running at the green wall. We can’t deny the effort of the Italians, which was important. There was no point in Ireland playing a big minnow and putting 40 points on them without reply. Ireland needed a test, but not to be tested. Italy did that.

So the backlash on this performance has, once again, been over the top from our online ‘experts’. We are not far off burning effigies of Joe at this stage based on the online nonsense. We need to look at this for what it was. It was a preseason warm up. It was Chelsea v Bohs. Nothing more than that. It was a way of shaking the rust off and working through a plan.  Ireland kept the opposition scoreless in the second half, kept scoring until the hour mark (a worry considering England kept scoring until the end against Wales) but for a PRE SEASON WARM UP this ticked the box!

So who impressed? Well anytime you get to watch Joey Carberry live is a pleasure. He scares the opposition every time he has the ball, not because he is a big guy or speedy, but because they literally have no idea what he is going to do. If they surround him, he clears them with a pass; if they give him space he finds space. Fantastic to watch. Hopefully the ankle isn’t too bad, he looked like he was heartbroken leaving the pitch. Carty comes on and plays like a 40 capper. Great to see. Some really smart pressure relieving kicks which harken back to the days of O’Gara, smart passing and marshalled well. We have 4 out halves. Sexton, Carberry, Byrne and Carty who can do a job. If we start the RWC with our starting side, then we will need the latter 2 for the rest of the group stages. Great to see the backups are running well.  Porter had 7 tackles missed 0 and beat 2 defenders off 1 run for 1 metre. Switched sides in the scrum and played like a veteran. More good news. Kleyne slipped in for a debut that looked slightly silent in the stadium, but looking at the stats, he got a lot of work done. 9 runs, 16 tackles with only 1 missed. Don’t believe the Eddie O’Sullivan hype. Kleyne did well, cleared well and looks to be the enforcer the team will need when he settles in.

So as we can see, this was not all doom and gloom. This wasn’t champagne rugby. This was probably a decent but undiscovered Lidl IPA type of rugby. Mostly positive, but you wouldn’t be trawling the shelves looking for it again.

Let’s just keep the heads, be supporters, don’t be fans or trolls.