Brought to you by The Couch Pundit Podcast Facebook ITunes  Stitcher

As we sit near midweek before the European Champions Cup final between Leinster and Racing, there are a lot of things flying around social media and my mind before team selection is made. Should Lowe be called in after being left out in the semi final? Where will Racing see their way into the game? Can Leinster continue the strangulation 85% output rugby they have been playing in big games and will Wayne Barnes be the headline grabber post game?

Starting with the first point. James Lowe. The enigmatic and great to watch New Zealander who could offload a water balloon while being tackled by an elephant. Massively impressive with ball in hand and improving in a complicated defensive system. Would you put him in ahead of Fardy? No. Would you put him in ahead of Gibson-Park? Before the semi final (and McGrath injury worries) I would say yes. Gibson-Park played his best game in the biggest game of his Leinster career, a massive boost for the lad and team. McGrath will be going through a late fitness test so if he is a worry the GP has to wear a tracksuit on match day. Larmour on the wing leaves Lowe in the Louis Copeland, slightly unfair but it’s the way it goes.

Secondly, where can  Racing get into the game? This is being written before the team selection has been made public so assuming that there are no new injury concerns (Machenaud being the last concern) we can assume that the second row of Ryan and Nakarawa will remain intact and I think this is where Racing see their way into the game.  The Racing lineout has been great to watch all year, the Munster showing being very impressive although the Munster lineout was more readable than the da vinci code. I think Racing fancy the lineout as their way in, the have stolen the second most lineouts in the competition and Ryans ability to call the opposing throw is top notch. They also may look at Ryan and Toner as targets, maybe the occasion will get to the youngster, maybe they can rattle him early on and get a toe into the match.

They will challenge the lineout, they wont rattle Ryan. Pressure on Cronin to deliver.

Thirdly, can Leinster continue their big game performances? Is the Connacht loss a sign that they are peaking for the big game? It appears so, it appears that the only injury concern is McGrath and that is not a new one. The team remains intact and ready to add a star. We are on the cusp of something special with this team and this is another marker in their development. Favourites by quite a margin, will they perform? Yes! They will strangle Racing as they have the others previous. The big games this season have seen a 38-16 win against a really good Scarlets team in the semis and 30-19 win against Saracens in the quarters. Both opposing teams fancied their chances, both where strangled. Marker sent!

Wayne Barnes is the extra factor in the game. As you can see from the below, he loves to stop the game. 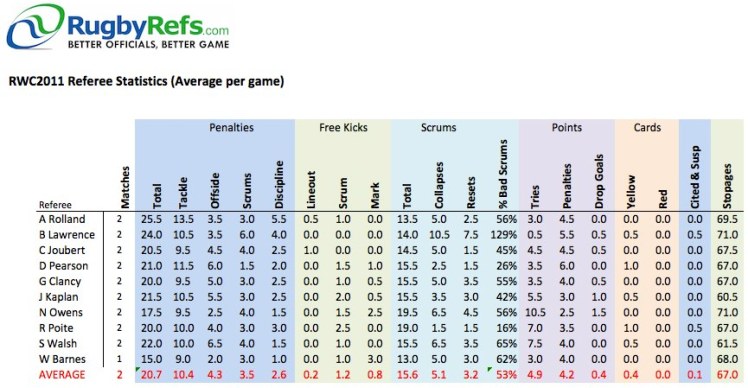 As a former lawyer he loves to admonish people. Loves to make sure the law is being followed. Leinster know this, and will have to keep their discipline throughout. Racing will fade and draw penalties, if Leinster get on the wrong side of Barnes early it will be a tough day at the office.

In closing, and before team selections, how many of the prospective Racing team would you pick to start for Leinster? Not many.

One thought on “Leinster v Racing 92, The Champions Cup, the dynasty and the history”