So, any news over the weekend? Anything exciting happening? Anything surprising?

Well for me the answer is yes, yes and no. Ireland marched into Twickenham and won easily. Well maybe comfortable is the better word (as corrected by the aul lad post-game on Saturday). There will be pundits speaking about the technicalities of the victory, but I thought that on the first day back at work I should keep it simple.

So how did Ireland do it? How did Ireland go through the competition without a loss while incurring injuries, knocks, blood and a high level of opposition?

Well it comes down to a few things. Starting off it is fitness and player management. Ireland have been kept at an elite level of fitness for a long time, this gives the team confidence to know they can keep going for 80+ minutes as seen in Paris. In fairness to the French on the day they had the fitness to go breakdown to breakdown with Ireland and even push Ireland back before the drop goal. There were a few penalties they got away with but they were standing up well. Great to see in the Italians too. They looked at the easy fixes much like France and addressed that. Positive for the 3 teams. Massively positive for Ireland. Every member of the Irish squad knows that they can go and put it on the line for as long as needed. They also know that after a tough training day they get a slightly lowered training load the next day. England did the opposite this year. They wanted to replicate match intensity in training. Not the way to go in any sport. In combat sport they train to fight, they don’t fight in training. Yes there is sparring done, both technical and hard, but that is not a regular thing. Rugby should be the same. The players are already fit by the time the 6 Nations arrives, the provinces have gotten the players to optimal, the Irish setup is taking that work and keeping it topped up. Great management.

Which leads to the second point why Ireland won with comfort all tournament. Joe Schmidt is a long term thinker, he is not overly stubborn in his thinking and his message to the players is always clear. Ireland lost to Argentina in the last world cup while losing 5 players from the front line. Even if Ireland got past Argentina, they would have been found out in the semis based on squad depth. It is almost like he has a wall at home with a list of players, backups and double backups. There were 7 players in the last quarter on a grand slam decider under 23. Joey Carberry had 30+ minutes in a decider. It shows that lessons are learned and players are given trust which is something they obviously respond to. 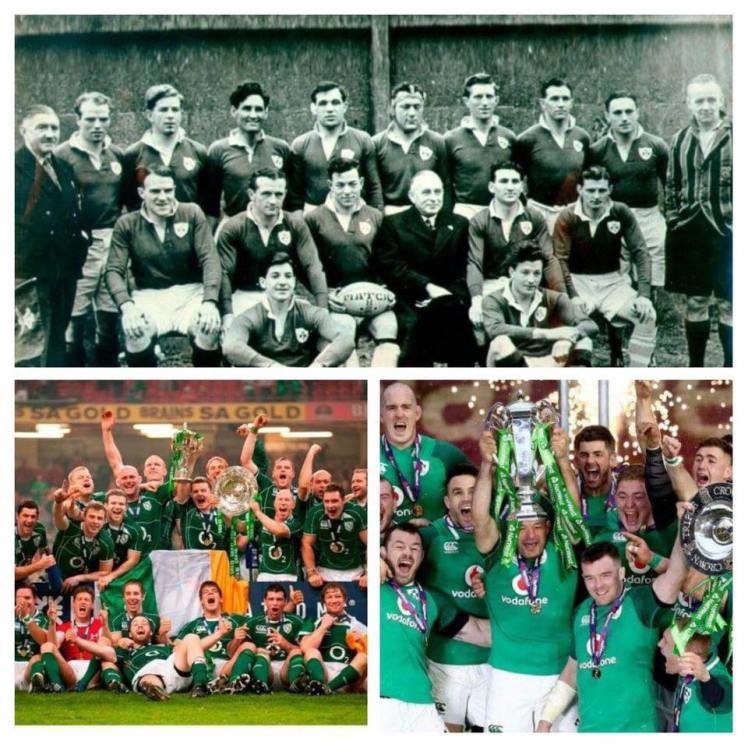 Following on from Schmidt’s forward planning, he has been bringing in fringe players into the training camps to show them how it all works. The road to starting is marked out well. Once you get into form, you will be brought into camp either holding pads or hitting the pads, then you work your way deeper into the system. No one is thrown in the deep end much like has happened to Ireland in the past. So now, Ireland has a clear path from junior and senior cup schools rugby to the senior squad. Another fantastic improvement from King Joe.

The next point is that the message given to the players is clear. It may be massively in depth and complicated to us mere mortals but to the players the message is clear. If you look at the set piece you can see who talks, what they say and it is never asked to be repeated. This is especially impressive when Murray (player of the tournament) switches sides at the back of a scrum, the call was made against Scotland and the players moved with purpose and certainty. England for example, had players out of position and then half a changed team for the visit of Ireland that takes time to get used to. Even at the highest level, if you are playing in one position for decades, and have been asked to do another job, it takes milliseconds to adjust. Ireland doesn’t seem to have that issue. Jordan Larmour (as in armour) came on at 13 having never trained in that position, I don’t know if the lad has played there since junior cup. But he was able to slot in because firstly he is obviously intelligent in terms of positioning, but he had Garry Ringrose to lean on if he was needed. Ringrose became a leader to Larmour and Stockdale, while only being a kid himself. This is another thing Joe does; he inadvertently on purpose makes people step up and lead. Ringrose is now the anchor of that midfield, all based on Joe putting Carberry at 10 and Larmour in the midfield. A stroke of genius.

The last point for me is the improvement Ireland has shown in the competition. Especially from the defensive side. Ireland score more tries that ever before, but in doing so the tries conceded may be a bit higher than we would have wanted. In saying that, if someone offered you the exact table that appears now, you would have bitten their hands off. Ireland did have an issue early on in the tournament with defines out wide. Part of it was the shooting of Stockdale, he is getting better every day at picking and choosing when to shoot, but it will take time. Earls shot out and missed but had the experience to circle back and tap the ankle against England to stop a try; Stockdale will have this very soon in his arsenal. But if you look at the last 2 games, Ireland forced Scotland into mistakes in 3 of their 4 sure fire tries. Tries that the media said they threw away, Ireland forced the mistake. Improvements were happening in front of our eyes. Against a big strong England team Ireland defended very well. England had 66% possession in the second half; they were really going for it. Ireland made 185 of 205 tackles for a 90% return. That is absolutely massive and a credit to the defensive system. England ran 433 metres to Ireland 224. Again keeping England out the way they did (last try being after 80 minutes) was proof that the defensive frailties are being addressed and the improvement is working.

So now, I think we can celebrate for a long time on this. This grand slam was how the tournament was supposed to go. Ireland went in as favourites, overcame obstacles, injuries and a media backlash to raise every trophy on offer. The message has been sent to world rugby, Ireland is a force. Ireland won’t wilt under the tag of being favourite; Ireland has strength in depth that is the envy of the world and Ireland has belief in their coach that is not seen anywhere else.

I hope you all celebrated hugely, I hope the hangover still linger and I hope we continue to march into next year.