Brought to you by The Couch Pundit Podcast

And so the festive season is over, the selection boxes have been emptied, turkeys feel safe again and the interprovincial derby’s are over for a few months.

Going into the fixtures there appeared to be a big gap between Leinster and the rest. That appears to have been the net result of the games. But the team closest to them are bringing the biggest surprise.

Connacht are now the second best team in Ireland. YES I SAID IT! It took some time for the new coach to come in and tinker with the Lam system but he (and they) are starting to bear fruits now. Going from a hammering of Brive in Europe to being dominant against Ulster and coming thisclose to beating Leinster with a battered Munster to play next, the present and future is bright for Kieran Keane and his men. They believe in what they are doing now ant it can be seen on the pitch. There was one team attacking in the last 10 minutes at the RDS on New Year’s Day and it wasn’t the home side.  That is another example that things are working in Connacht, when the team fights for the win until the end. It was only the classy and confident defence of Leinster that kept out the visitors.

Leinster have been the form team in Europe recently and have been playing great rugby. We all know the skills are there, but it is when the game goes against them that has been most impressive. The first half against Exeter being the start of this visible shift from the team. Players off the pitch and a massive score deficit there lead to the team adapting and overcoming to get the win. The trust the players had in the plan and each other was massive. Leaders led and when that happens on top of a skill level then the team is hard to beat.

Against a Munster team playing at home, Leinster won in a canter. Munster came into the game for 20 minutes but as soon as Leinster decided they were going to play, they won easily. This could cause a massive crack in the Munster mind-set. You could see they thought they were coming back into the game, and they were. But it wasn’t them playing badly that cost them, it was Leinster decided to take the game away from them.  Having been on that side of a result many times, it is demoralising and takes time to get over. Munster got on the bus to the Kingspan stadium to right a wrong. To put the Leinster defeat out of their mind. They began well, even leading 17-0 at half time. But bad decisions and a red card brought the home side back into the game and the eventual win. People are blaming Sam Arnolds red card as the sole reason for a Munster loss, in reality they couldn’t manage the game, and they really imploded. They are a team with a new coach that will take time to find its way but as we stand now, no one at the top table in Europe would be worried about playing Munster home or away. Thomond Park is no fortress, especially going by the supporters who were out to watch the Leinster match.

Which bring us to Leinster. A team in THAT vein of form at the moment where no one wants to play them. Whether you put 17 points on them in the first 17 minutes you will know that you won’t skate through the game, you will always be tested. It is a massive metaphorical gun they have to the heads of the competition. You always know that Leinster will find a way, that is not based on history or myth that is based on results. Not just results from 2006, results from this season. The depth in the squad is at least 3 to a position with the exception of 9. The 3 players per position are also very close in terms of ability, so anyone can slot in at any time without any adverse effects. There is no hand holding with the new players. The only question I would have is at 9. Luke McGrath is going to be great. A really really good player who sits beside J10 with ease. Gibson-parke is good, but there is quite a gap between the starter and the backup. But I am sure there is a room full of them in the academy in ucd. 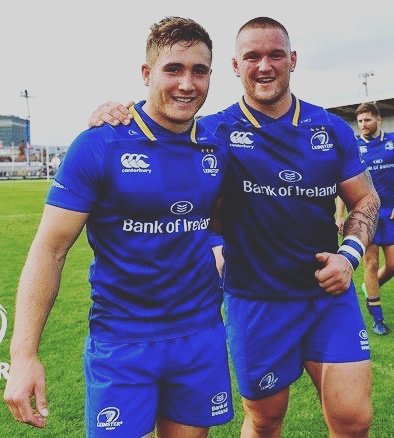 If you rewatch his try against Munster, just look at his feet until Zebo approaches him at the end. He doesn’t lose any speed when he changes direction. He is at full tilt from step one and when he spotted Zebo coming from his peripheral vision, he switched from carrying in his right to his left just so he could fend off Zebo and score. Split second decision making under pressure. Not bad for a 20 year old.

I am a lot older than that and I have been making bad decisions without pressure, for decades.

So should he be given a shot in green? Is he good enough? Will Joe pick him? Well for me, it is yes, yes and kind of. He is definitely good enough and any holes in his game can only be fixed by pressure play. For any tiny mistake he makes you will get highlights and a score. The ratio of mistake to score with bee 1:3 so he should be given a shot. Joe has stuck by Rob Kearney at full back and rightly so. He had a massive November and has been near his best when he gets a run without injury. Pressure on Kearney can only be a positive in blue and green. Joe will be bringing Larmour to camp, whether he gets to wear the tracksuit or the Louis Copeland on match day is the bigger questions.

Special shout out goes to Andrew Porter. A 21 year old tighthead (former loose head) who has been slotting into the Leinster front row like a 50 match veteran. Another good headache for Joe to have. The more big game time he gets, the higher the probability of him getting a tracksuit on match day in the 6 Nations.