Yet another massive Irish sporting weekend is in the books and yet again, naysayers have taken to social media to undermine and begrudge the achievements of the soon to be greatest sportsperson in Irish history. 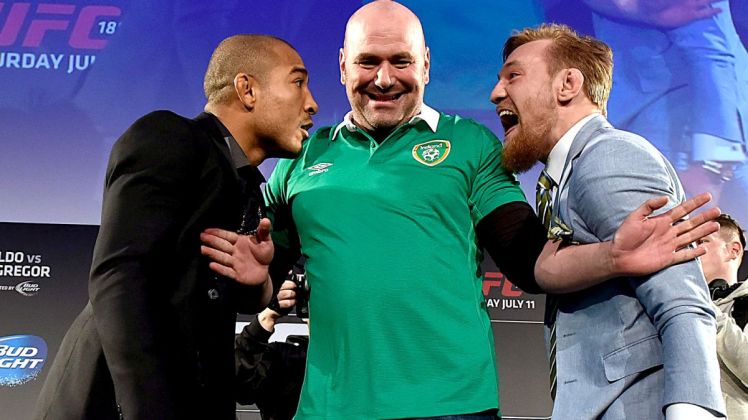 Firstly I’ll bring you through the fight, as seen from my bed at 5:30am Sunday morning. Then into my opinion of what’s next and then finishing off with the social media twitter warriors and how they really don’t know what is going on.

Because I am not in any way capable of an all-nighter anymore I went to bed and set the alarm for 4:30. I snored my way through the best few hours’ sleep in history and clicked on the UFC app. I caught the last 3 fights. I wiped the sleep from my eyes to watch yoel Romero and Ronaldo Souza. 2 absolute beasts at middle weight. Romero hit a spinning back fist and put a hefty beating on Souza, to the point where he was 9 Guinness wobbly when the bell rang to finish the round. He improved as the fight went on and even looked strong at some points. But a 10-8 first round won it for Romero, even though I may have sneaked it to Souza.

Now I was warmed up it was time for the co main event. Weidman v Rockhold. I had been going back and forth on this all week. I think Rockhold is class and Weidman might be the strongest mind in mma. Never going to give up that lad. Surprisingly they both started getting tired, Weidman started sneaking ahead but decided that it was the perfect time to try a wheel kick that Stevie wonder would have seen coming. Rockhold took him down and put a serious beating on the champion. It got all kinds of gory in there. Elbows rained down on Weidman. He tried to defend himself, but he was in trouble. Herb Dean gave the champion a lot of time (maybe too much) to try and work his way out. 30 seconds of fairly serious punishment resulted. The bell rang and when Weidman got up, he was toast. He had never been treated like that before. The next round came and the champion even threw a few punches, trying to clear the cobwebs but he was just gone from the last round. Rockhold took him down and Dean stopped it nice and early, maybe because he knew he should have stepped in in the previous round. Unreal effort from the 2 lads.

And then the moment arrived. Out came Conor McGregor, the king of Ireland. Loosey goosey he was! It was like he was walking to the shop for a sausage roll. Aldo looked a bit jumpy but nothing more than usual. When he got to the ring the eyes stayed down like normal, he never once looked at Conor. He looked a bit soft around the stomach area too. Conor looked like a beast ready to go. Starting the talk early from across the cage in the crouch position. They met mid ring, Conor was begging for the engagement. He threw a jab to Aldo’s chest and Aldo would up with a right the came from the streets of Rio, he put the house into that punch. McGregor read the punch slipped to the right and threw a mid-power left hook. The exact same slip and hook combo I saw live when he fought for cage warriors, I could actually hear that punch from the stands. The mix of Aldo’s momentum, the precision of the punch and Aldo legitimately believing he couldn’t be knocked out resulted in him seeing stars. 2 hammer fists and it was all over. Every single doubter silenced, every non believer safely tucked into the bandwagon. 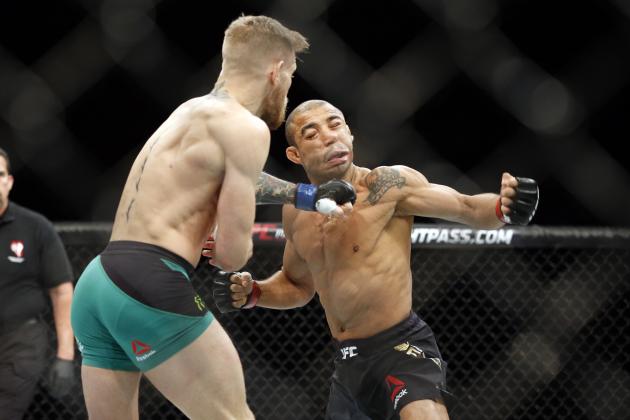 The great thing was the class afterwards (aside from flipping off the Aldo’s corner). He praised Aldo as a champion and spoke proudly about his achievements. He knew that this victory unlocked the door to him getting anything and everything he ever wants from the UFC.

I tried hard to not scream the house down. Absolutely no one saw it going like this. If anyone says to you they called it with 1 punch then you can call them a liar. I expected it to end midway through round 2. I wasn’t able to say which was it was going to go. My heart said Conor, but when you are in there with a beast who hasn’t been beaten in a decade it’s hard to bet against them.

The biggest MMA/combat sporting event beckons for Conor in Croke Park next summer. I reckon it will be at 155 against the winner of the DosAnjos and Cerrone fight next weekend. I do hope it’s the cowboy because the trash talk would be immense. I personally can’t wait to shout my lungs out for the champs long walk to the ring. I aint ashamed to say, there may be a few tears too. I have watched a few of the lads go from gaa halls to cage warriors, up to the UFC and it is a beautiful thing, and a great example to see hard work paying off. It is a great example for young people in a world where it’s all about selfies and how big your bum is.

And then it started. Monday morning new radio is bad enough, but there were out of touch old people complaining about the fight, the violence and how it is more dangerous than boxing.

First of all that is completely false. If that was a boxing match (not fight, because boxing isn’t fighting) then Aldo would have been given a standing 8 count and thrown back into combat with minimal worry for his welfare. He would have taken a lot more punishment which would have an adverse effect on his quality of life. That is how hard Conor hits. Instead, there was the left hook and 2 hammer fists and the ref did a great job protecting Jose Aldo. Boxing is far worse for you than MMA. That is not just me saying that, that is science telling you.

As an aside, if fighting is not for you then you will never enjoy MMA. How about you stick to what you enjoy instead of spending time on something you don’t like? Would that not make life a bit easier? I don’t like strictly, so I don’t watch it. I am not a complain junkie.

Then there is talk of the fight being fixed. Look at that punch, case closed.

People also saying that Aldo was a joke all along. These are people who have zero idea about the sport. Aldo has been undefeated in a decade. He has defended and dominated top contenders. I don’t think he has fought anyone outside the top3 ranked in the division. Conors victor wouldn’t have meant as much if he didn’t beat the unbeatable! Conor slayed the monster! For a decade, fighters tried to figure out Aldo and they couldn’t. Conor did, and that is why this isn’t just a victory, it is a passing of the guard.

Second lastly, if you are talking badly about Aldo and laughing at his defeat then you are exactly the problem I have with the sport. This man put his body on the line for his whole life to fight to put food on the table for his family. You aren’t tough enough the wash his jockstrap so who are you to talk down about his losing, or his crying afterwards. You are brave when you are at the keyboard, but you wouldn’t even come training let alone say anything to Aldo if you were within ear shot.

Apologies for the above, it’s just that that behaviour really gets to me.

For me this was more than sport. Conor went from the 188 club (some of you will know what that is) to being a world beater. He believed in himself, worked hard and is now reaping the rewards.

What a role model for anyone of any age!